Available as an ebook boxed set 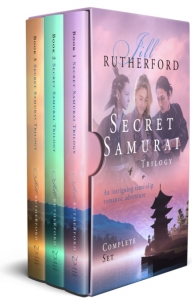 ‘An enthralling and absorbing read which flips between ancient and modern Japan, expertly handled by the author’

‘I couldn’t put this down. I loved it. The story combines fascinating historical facts about Japan, old and new, of which I had no idea and wrapped it up in not one but TWO love stories! The characters are totally believable and the story is really gripping. It’s up there with the best of them!’ 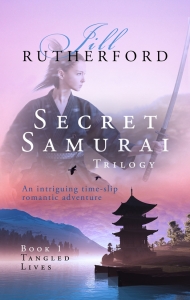 Modern Englishwoman, Bebe Bell, is time-slipped into the mind of male samurai, Kai Matsuda, who is fighting in the civil war which changed Japan and the world. She lives parallel lives. One in today’s Japan with Kenji, the man she loves, unaware of the secret which is destroying him. The other with Kai, who is trying to change his country as it tears itself apart.

Yoshi is an aristocratic woman who is forced to disguise herself as a male samurai in order to survive. This brings her influence and respect, something she has not experienced as a woman of the 1860’s. She is empowered by it and her ambitions grow ever larger.

Yoshi and Kai meet, but are fighting on opposing sides and cannot admit their love for the other – and neither know that Bebe is in Kai’s mind.

When these four lives intermingle . . . 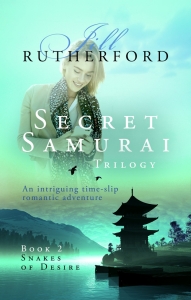 The second book in the Secret Samurai Trilogy. Bebe has to cope with the growing pressure of a double life in different centuries and the restrictions imposed on women in old Japan. Prejudice affects her and her life with Kai. Kenji fights his own demons as his past threatens his future.

Yoshi, a woman forced to live and fight as a male samurai, is trapped in Kyoto. Alone and vulnerable, she has to deal with the Shinsengumi, the most vicious samurai force in Japanese history. The civil war escalates and the country becomes more unstable. 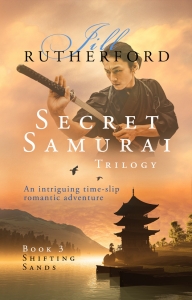 The third book in the Secret Samurai Trilogy. Events escalate and steer them into unexpected and dangerous directions.

Yoshi, an aristocratic woman forced to disguise herself as a male samurai finds danger and increased ambition after a chance meeting.
As Kenji faces his own dangers both physical and emotional, Bebe struggles with her duel life and a deeper understanding of it.

A new world beckons which needs ambition, courage and trust.

The future of the new world shifts on sand.

‘An original plot with some very interesting and likeable characters. There’s also a sweet romance, a time travel switch, and a dose of Japanese history, and all of this makes this book totally unique. As you turn each page, it’s hard not to admire just how well this author brilliantly conveys the time travel element. You seamlessly move from one time period to the other and both are equally fascinating.

Also, the author’s complete understanding of the Japanese culture is really obvious right down to the fine detail. Anyone with any knowledge of Japan will inevitably be impressed by the way Kenji, Bebe’s new love interest, and Kai, the samurai, are portrayed. The Japanese character is very different to the Western one and this is sometimes misinterpreted in other books but Rutherford has developed her characters very well to show the real differences. The character of Kenji is written with such authenticity and a deep understanding of the Japanese mind-set.

As well as this, the Japanese people’s attitude towards Westerners in the samurai period was obviously carefully researched but their roles were so well-written it did not feel in any way unnatural. The fact that there were several schools of thought about whether the Japanese should welcome trade with the Westerners or fight to keep them from infiltrating Japanese society was clearly portrayed in this book and readers will benefit from this without feeling like they’re bogged down with historical facts.’

‘I was impressed with the originality of its concept. I was gripped, carried along with the power of the writing and the excitement and intrigue of the story longing to know how the author would bring all the strands of her plot together, and I wasn’t disappointed. The characters in this time-slip epic are still vivid in my memory, a sure mark of a successful novel’