I’ve just returned from a wonderful afternoon out at the Redoubt Fortress on Eastbourne seafront. It’s one of the events that you wonder why the place is not stampeded by eager visitors taking advantage of the £6 ticket fee for entry to the museum, an hour’s talk in one of the atmospheric ‘casements’ (a cell like room) and afterwards, delicious tea/coffee and cake – all for £6. Incredible – and the fortress is incredible too.

For those who don’t know what the Redoubt Fortress is, it’s one of those buildings that were inspired by our ancestors’ imagination and seemed like a good idea at the time.

It’s rare. There are only three in the UK, in Dymchurch, Harwich and Eastbourne!

It’s a magical place, full of history, misery, strange happenings, joy, and now respect for the past. Originally, it was built because England got in a state about possible invasion from France. In the early 1800’s, Eastbourne was a scary place to live at that time with the very real threat of invasion by Napoleon. Newspapers whipped up the scaremongering and the powers that be decided a fortress on the seafront would be a good idea, together with many Martello Towers (round, robust small lookouts to sea), dotted along the coast.

The building of the Redoubt started in 1807 and was built circular, heavy, thick, large and imposing. Unfortunately, as is the way of things we cannot foresee, it was made obsolete by Wellington winning the Battle of Waterloo in 1815 and defeating Napoleon!

What was it like to live there? It housed around 340 soldiers at any one time and after an interesting and informative talk by Eastbourne Heritage, I would say four words sum up living conditions well.

The soldiers slept on trestle beds, ten to a small, cell like brick built room. Rations were weekly and if you ate all yours before the week was up – too bad – you also had to cook it yourself. Toilets were only for officers, and a goodly walk outside the fortress, for the ordinary man, a bucket was provided for each room of ten men. 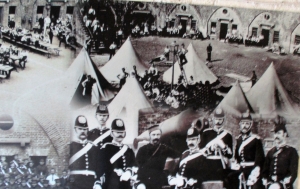 One poor soldier, Robert Keable, committed suicide at the Redoubt in 1854 and on his death certificate it says, “suicide due to temporary insanity because of drinking”.

It is cold enough now in winter at the Redoubt with the sea crashing onto the beach only a few yards away, but then, it would have been not only cold but running with damp.

Soldier, John James Hass, went AWOL many times and got arrested each time until he left the army and got a job as the Sanitary Inspector for Eastbourne. Mmm . . .

The Redoubt was put up for sale by the Ministry of War in 1884, but no one wanted to buy it. They decided to use it for training soldiers and they even took in some destitute families who had nowhere else to go. Can you imagine being a lone woman with children and ending up living in the Redoubt with all those soldiers and no cooking facilities, dodgy water and a bucket! I doubt they stayed long. Maybe that was the idea.

By the early 1900’s, some improvements like basic plumbing were made. Groups like the Church Lads used it for camps and then, finally, Eastbourne Local Authority bit the bullet (as one might say) and bought it from the war office for £160. And it has been debating what to do with it ever since!

It was reincarnated as a bandstand in the 1930’s. A model village in the 1950’s. An aquarium in the 1960’s – yes I did mean aquarium – and guess what? With all that water and the sea so close by, it riddled the building even more with damp and created many problems the council had to deal with.

In 1977 it opened as a military museum and it is a great little museum for the Royal Sussex Regiment. One member is our own hero, Nelson Victor Carter, who won the Victoria Cross in the First World War for his outstanding bravery. 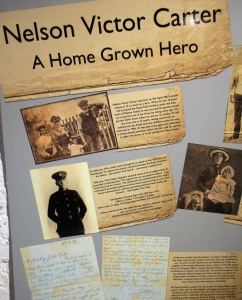 I’ve never felt a car to be frightening before, but I was certainly intimidated by a huge, cream four wheel drive car from the Second World War. It was captured with the Nazi General Von Arnim in the western desert (North Africa) in 1943. The Royal Sussex were the company who captured him and the car was given to them for safe keeping. As I stood in front of it, I had to look up to the windscreen above my head. Imagine a German general standing in it and glaring at you. No doubt about it – it was scary – and I felt the car still held an aura of menace around it. I can’t get it out of my mind. 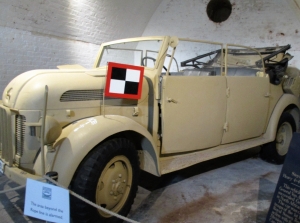 The damp and cold have taken their toll on the exhibits and the regiment have to find a new place for their collection before it disintegrates. 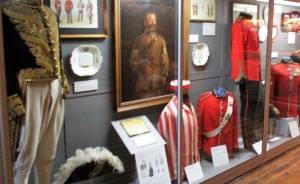 The Redoubt is about to find a new life with Eastbourne Heritage soon and personally, I am looking forward to its next reincarnation.
I’ve volunteered to help – hope they don’t think I’m one of the exhibits!