I was lucky enough to be included in a tour of one of Eastbourne’s best kept secrets: Compton House. It is not open to the public, but thanks to Sussex Archaeological Society, I was able to join in with one of their rare tours. 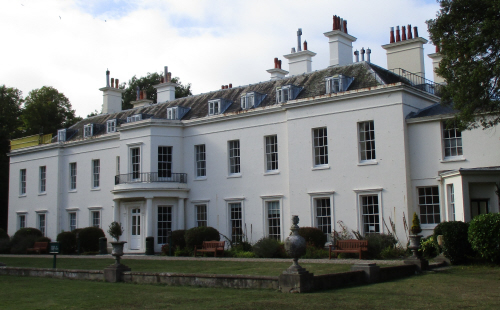 The house is beautiful and full of wonderful mouldings and architecture as one would expect, but I would like to concentrate more on the people who lived there and their personal stories.

The 7th Duke of Devonshire, William Cavendish, was the man who inherited Compton House when one of his ancestors, Lord George Cavendish married Lady Elizabeth Compton in 1763. In 1858 it was added to the estates of the duke.

Those of us who are interested, know that the 7th Duke had a vision to create an upmarket, seaside resort in Eastbourne for people of quality. He built huge, extravagant villas and connected them with wide, tree lined boulevards. It is rumoured that he told the head of the railway company, when it finally reached Eastbourne in the mid 1800’s, that he didn’t want them to sell cheap day tickets to Eastbourne as he didn’t want that class of person to visit. Well, I’m sure the Duke must be turning in his grave as today, Eastbourne is full of that class of person (including me) living here and enjoying his legacy.

For me, one of the most poignant stories attached to this house was a tiny piece of history. Scratched in the corner of a window pane in one of the bedrooms was this: 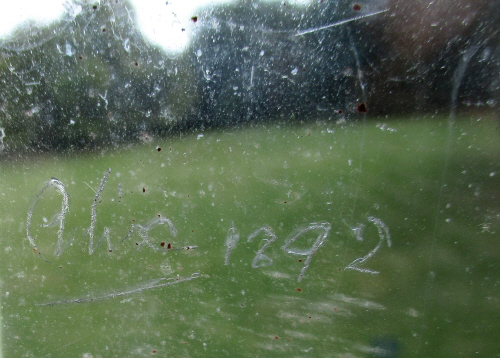 This was Queen Victoria’s grand-daughter, Alexandra of Hess, who, two years later, married Nicholas, Tsar of Russia. The same Nicholas and Alexandra who were assassinated, with their children, during the Russian Revolution. This tiny bit of history really touched me and brought it to life. It was such a small, personal thing to do and it moved me with its intimacy, innocence and tragedy.

Last century, after the death of a few dukes close together, the family were rocked by death duties and were forced to sell off a lot of their assets in Eastbourne and the house was rented out to a ladies’ finishing school. Their most famous student was Benazir Bhutto. She was also assassinated later in life. How extraordinary!

Another extraordinary thing is, the duke at that time, with the help of his son, was chopping down a tree in the garden of Compton House when the duke felt ill and the doctor was called. For those of you who don’t know the history of Eastbourne, as well as having two famous visitors who were later assassinated, we also have our own alleged serial killer doctor. Dr. John Bodkin Adams.

Dr Adams was accused of murdering 163 patients but was acquitted after a trial, however, doubt still hangs over him and he was known to have disliked the duke because he was a freemason. Dr Adams had a hatred of freemasons. The duke died three hours after the doctor’s examination. The mystery remains – did the doctor kill the duke?

Death duties also forced the family to sell some of the land around Compton House and developers built several tall blocks of flats in front of the house, which of course, meant the house was overlooked. It is said that a recent duke loved Eastbourne and the house so much he wanted to bring the house back into the family and spend time there, but his wife said she refused to live in a house overlooked by the hoi polloi.

The house became a language school with many students from all over the world taking advantage of this beautiful setting.

One day, the duke decided to visit the house to see how things were going, and as he walked down a narrow corridor used by the students, he stopped suddenly beside a huge 18th century painting of a brother and sister. “What’s that doing there?” he is reputed to have asked. “It’s worth a quarter of a million pounds!” The painting was carted off to the duke’s other home – Chatsworth. But the school had become fond of the painting and wanted a copy. It now hangs in the same narrow corridor as the original and the story goes that the brother depicted in the painting suffered from the gambling sickness and was in serious debt. He came out of a gambling den one night and was attacked in the street. He woke up in chains on a ship in the middle of the ocean. He was taken to Jamaica and was kept as a slave for seven years until it was deemed he had worked enough to pay off his debts and he was allowed to go back to England (his father paid his fare). Another extraordinary story involved with this house!

What a fabulous place to learn English. I hope those students realise how lucky they are. 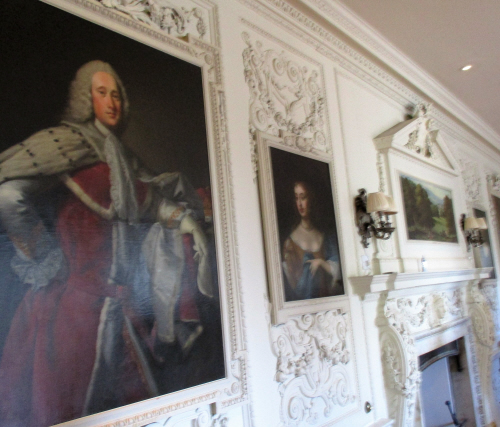 Some days are just special A gem from the past . . . and coffee and cake too!
Scroll to top